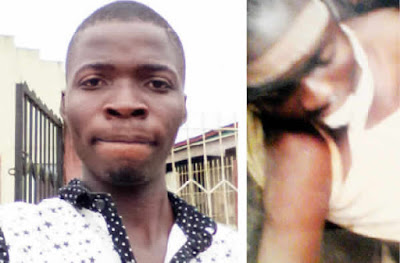 An Assistant Superintendent of Police, Salawu Kazeem, has been arrested and detained by the Lagos State Police Command for allegedly torturing a 21-year-old carpenter, Ganiyu Akinyemi, to death in the Aboru area of Lagos State.
Kazeem and two accomplices, identified only as Yusuf and other unknown, were arrested  on Tuesday.Ganiyu, who hailed from Aiyetoro in the Yewa North Local Government Area of Ogun State, was staying with his parents in the area.
Punch newspaper reports that it happened on Monday at about 5pm, the ASP and four men had come to the deceased’s apartment on Victor Fagbemi Street, Aboru.

They had reportedly accused the carpenter of stealing three T-shirts in a house where he went to work the previous week. The house, where Ganiyu allegedly stole the shirts, was also where the ASP lived.It was gathered that the ASP arrested Ganiyu and told his family that he would detain him at the nearest police station.
When the family members went to the Oke Odo Police Division around 7pm, the 21-year-old was not found there, while no report had been made in the station.The family members were called on the telephone around 3am on Tuesday that he was admitted at the Oke Odo General Hospital.
He had reportedly sustained injuries on the knees, hands and forehead.
When the family members got to the hospital, they were said to have been met by one of the men who followed the ASP to the house. They were also said to have been told by a doctor that Ganiyu was dead.
The matter was thereafter reported to the Oke Odo Police Division on Tuesday and the ASP and two of the men were arrested, while two others escaped.
Our correspondent learnt that the ASP reportedly begged the victim’s family at the police station, saying Ganiyu’s death was a mistake.
Speaking with PUNCH Metro, Ganiyu’s father, Alhaji Akinyemi Ibrahim, who is also the chairman of the community development association, said he released his son to the men because he saw the ASP’s identity card and trusted that his son was being taken to a police station.
Ibrahim added that he was shocked to realise that Ganiyu was taken to the complainant’s house, where the ASP also stayed, and was tortured till he became unconscious.
He said,
“On that Monday, at about 5pm, I had just returned from a wedding in Kano State and I was very tired. Five men came to the house and asked for Ganiyu. When he came out, they started threatening him.

“I asked them to identify themselves, and the ASP showed me his ID card, and said Ganiyu stole some T-shirts when he came to fix kitchen cabinets in his house. He added that he had come to arrest him.

“I did not have any problem with that. I felt secured that it was a police officer who came to take him away, and he had said he would be taking him to the nearest police station, which was Oke Odo division. I told them that I would take a shower, rest a little and meet them at the station.“But to my surprise, around 7pm when I wanted to go, the phone number that the ASP and his men gave us was switched off. I sent one of my sons to check them at the police station.“The boy, however, rushed back to say Ganiyu was not taken to any station.“It was around 3am on the following day that we got a call that Ganiyu was hospitalised and was in a critical condition at the Oke Odo General Hospital.

“When the hospital officials realised that his knees, hands and forehead had been badly injured, they insisted that they would only attend to him when they saw a family member; that was when the ASP and his men were forced to call us on the telephone.”

Ganiyu’s elder sister, Saidat Ibrahim, said,
“Ganiyu had told us that the men gave him the T-shirts after he finished working in the house. But when they wanted to frame him up, they said he stole the shirts.”
Posted by dubem naija blog at 1:37 pm