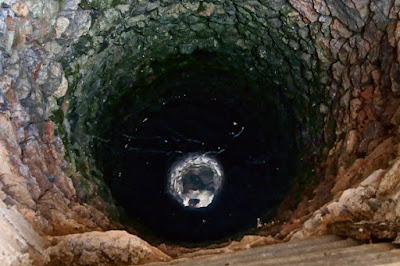 A teenage girl survived being  raped for a fortnight, shot twice in the chest and thrown down a 30ft well .She now survived to bring her attackers to justice.  The 15-year-old, known only as Poonam (not her real name), was left for dead inside the well, but managed to raise the alarm and ensure her attackers were arrested,Times of India reports.
She was bundled into a car by an acquaintance as she went to buy a SIM card on November 22 around 5pm.She was then taken from her West Delhi home to an isolated farmhouse near Salempur Gurjar village.

Her three attackers, two of them minors, kept her for a fortnight and raped her every time they brought her food, police the girl told police.

On Saturday the suspects attackers told her she was going to be released and shoved her into the car.
She tried to escape as the men stopped to have a drink of water. But as she ran away she was shot twice in the chest.

The attackers, who thought she was dead, then threw her in a 30ft deep dry well in Tughalpur Village.
But brave Poonam managed to survive the fall and the freezing nighttime conditions and spent hours screaming for help until she was heard by one of the villagers.
Posted by dubem naija blog at 11:51 am