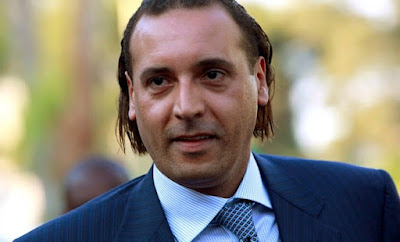 The son of late Libyan leader, Muammar Gaddafi, has been kidnapped in Lebanese capital of Beirut, AFP reports, citing security sources.  According to reports on Twitter, Hannibal Gaddafi was seized by members of the Lebanese Amal Movement.

Hannibal, 40, is the fifth son of Colonel Gaddafi and his second wife, Safia Farkash. After the rebels took the Libyan capital of Tripoli in August 2011, Hannibal fled to Algeria with the rest of the Gaddafi family members and was later granted a political asylum in Oman.
Posted by dubem naija blog at 10:09 pm