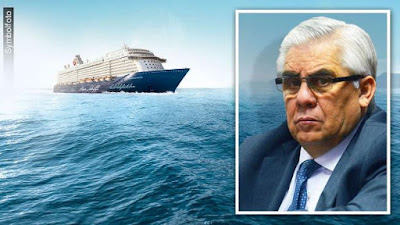 
He is one of 16 current and former FIFA executives charged in an indictment announced Thursday by Attorney General Loretta Lynch. In all, 41 people from soccer's world governing body and associated marketing companies are facing charges in a sprawling criminal case that has thrown world football into crisis.

Customs and Border Protection agency officers arrested Trujillo on the ship at Port Canaveral, Florida, a popular departure point for vacationers seeking sunburns in the Caribbean.

A day earlier, Swiss Police working with the FBI, roused two top FIFA executives from their beds in a luxury hotel in Zurich before dawn. A similar fate met seven other FIFA officials in May when the first charges in the case were brought.

Kelly Langmesser, FBI spokeswoman, says Trujillo would face a judge in the Tampa federal district and then be transferred to face charges brought by the U.S. Attorney in Brooklyn.
Posted by dubem naija blog at 3:52 pm