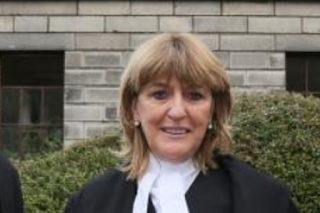 A female judge was savagely beaten by a man who disagreed with her ruling. Justice Miriam Walsh was battered in a prolonged attack before Irish police restrained and arrested the thug. She was relentlessly punched in the face until security and Garda officers managed to restrain him.

The incident occurred at around 1pm at a family law court sitting at Dolphin’s House in Temple Bar, Dublin.

Justice Walsh was taken to hospital by ambulance but has been released, the Irish Mirror reports . It’s believed the judge was attacked by a man who was giving evidence in a case.

A spokesman for the Court Service confirmed the assault.

He said: “Security systems are in place and were operational. This allowed the gardai to intervene and make an arrest. “The judge’s injuries are not believed to be serious. She has been discharged from hospital.”

Sources told how the judge was left helpless as the thug repeatedly beat her.
Posted by dubem naija blog at 7:13 am