Ex-Minister Confesses: I Gave N600m To Bode George, Odili and Others 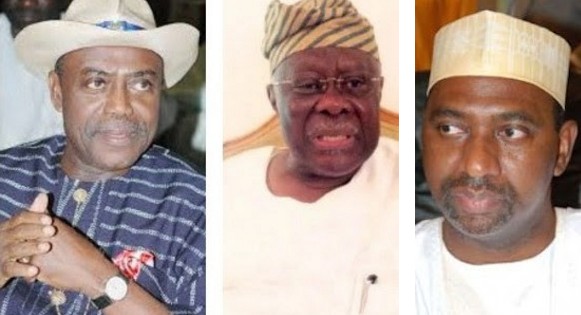 The embattled former Minister of State, Bashir Yuguda, has confessed that he gave a total of N600m cash to six chairmen of the Contact and Mobilisation Committee of the PDP for the 2015 general election.

He said he instructed Jabbama Limited to transfer N300million to
BAM Properties whose account was given to him by ex-National Chairman of PDP, Bello Haliru.

Yuguda, who made the revelations in a Statement of Witness/Caution which he wrote on oath, said he sent N200m to the erstwhile PDP Governorship candidate in Kebbi State, Bello Sarkin Yaki.

The statement is part of the proof of evidence against the former minister whose trial is scheduled to commence this week at the High Court of the Federal Capital Territory (FCT).

The ex-minister is expected to account for over N3.050billion including N1.1billion being part of the funds in the account of the ONSA and aggregate sum of N1,950,000 belonging to the Federal Republic of Nigeria, which sum was transferred to Jabbama Ada Global Services.

The ex-minister said: “For the cash disbursement of N600million, it was meant for the six zonal chairmen for Contact and Mobilisation Committees for Election of 2015. The chairmen are Bode George, Amb. Yerima Abdullahi; Peter Odili; Attahiru Bafarawa; Jim Nwobodo; Ahmadu Ali. The sum of N100million was given to each chairman. I gave the money in company of Prof. Alkali, who was Political Adviser to former president. The zonal chairmen are for the Peoples Democratic Party(PDP). I also instructed Jabbama Limited to transfer the sum of N100m to Dalhatu Limited on the request of Attahiru Bafarawa.

“I also remember that Bello Sarkin Yaki was among the people that the then NSA instructed that I send the sum of N200million to. He was the PDP gubernatorial candidate in Kebbi State.”

Yuguda, who claimed he had liaised with Stallion Limited, gave the details of other disbursements.

“When the account was in credit, disbursement was made from time to time on the instruction of the then NSA. Part in foreign exchange or transfers.

“I wish to add that sometime in February 2015, I instructed Jabbama to transfer the sum of N300m to BAM Properties. The account was given to me by Bello Haliru as one of the people the former NSA requested me to give money. I also remember that Mahmud Aliyu Shinkafi was sent the sum of N100million on the instruction of the then NSA.

“Further to my statement of 30th November, 2015, I have brought the sum of $829,800(equivalent to N200m) and N600m was given to me to distribute to the six PDP Zonal Committee chairmen. I don’t know who are the directors of Dalhatu Investment Limited but funds were transferred to the company’s account on the instruction of Dalhatu Bafarawa for the total amount of N1.5billion received from the then NSA by Jabbama Limited.

“I shall endeavour to recover the sum of N600million given to the six zonal PDP committee chairmen, while I appeal to the commission to use their machineries to trace the remaining balance of the money transferred to various accounts.”
Posted by dubem naija blog at 12:50 pm