DPO that Killed a Subsidy Protester Jailed for 10 Years 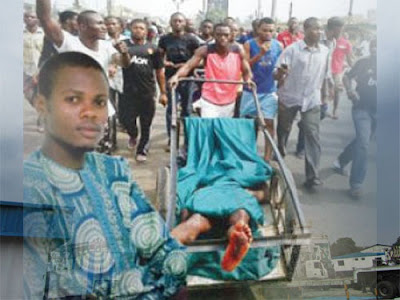 A former Divisional Police Officer, Segun Fabunmi, has been sentenced to 10 years in prison for the killing of one Ademola Ade in Lagos during the January 2012 protest against the removal of fuel subsidy by former President Goodluck Jonathan. Ade, a fashion designer, had been shot dead at about 9am on January 9, 2012 by Fabunmi, who was the then DPO in charge of Pen Cinema Police Station, Agege, Lagos.

The victim was said to have been shot dead when Fabunmi led a patrol team comprising five junior officers to Yaya-Abatan and Abeokuta Streets around Ogba area of Lagos.

Fabunmi, who has since been dismissed from the Nigeria Police Force, was on Monday convicted and sentenced by Justice Olabisi Akinlade of a Lagos State High Court, in Igbosere.

The convict was also found guilty of causing grievous bodily harms to three other persons, Alimi Abubakar, Egbujor Samuel and Chizorba Odoh  during the said protest.

Handing down the sentence on Monday, Akinlade rejected the argument of Fabunmi’s lawyer, Mr. George Oguntade (SAN), that the convict accidentally fired the shot that killed Ade, while struggling to retain the possession of his riffle during a confrontation with a mob.

The judge said the prosecution led by the Lagos State Director of Public Prosecutions, Mrs. Idowu Alakija, proved its case beyond reasonable doubts.

“The only conclusion that can be drawn is that the defendant recklessly shot his rifle and in the process the bullet hit the deceased. He definitely knew that shooting an AK47 can cause grievous bodily harm to anyone the bullet hit.

“The fact that he was on a lawful duty did not mean that he should have shot his gun sporadically,” the judge held.

The convict had on May 5, 2013 been arraigned on seven counts of attempted murder and causing grievous bodily harm filed against him by the Lagos State Directorate of Public Prosecutions.
Posted by dubem naija blog at 6:59 am