Dasuki, Bafarawa, Yuguda, Others to spend weekend in EFCC Detention 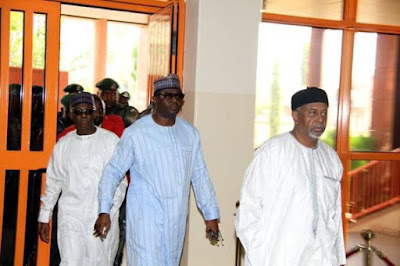 The immediate past National Security Adviser, Col. Sambo Dasuki (retd.), a former Governor of Sokoto State, Attahiru Bafarawa, and their co-accused who are being prosecuted on 22 counts of misappropriation of about N13bn meant for purchase of arms by the office of the NSA will have to spend their weekends in detention following a Federal Capital Territory High Court in Maitama, Abuja fixing Monday to rule on their bail applications.

Justice Peter Affen after hearing the bail applications on Wednesday ordered that the accused persons be remanded in the custody of the Economic and Financial Crimes Commission pending when his rulings on the motions for bail would be delivered on Monday.

Others who were on Tuesday arraigned alongside Dasuki and Bafarawa and were also on Wednesday ordered to be remanded in EFCC custody to await rulings on their bail applications are, a former Director of Finance and Administration in the Office of the NSA, Shuaibu Salisu, a former Minister of State for Finance, Bashir Yuguda; Bafarawa’s son, Sagir Attahiru, and a firm, Dalhatu Investment.

Meanwhile, Justice Yusuf Baba of the same FCT High Court in Maitama, had also on Tuesday fixed Friday for ruling on the bail applications in separate case involving Dasuki as an accused person with 19 counts of alleged misappropriation of about N32bn arms fund preferred against him and his co-accused.

A former Director of Finance and Administration in the Office of the NSA, Shuaibu Salisu, who is a defendant in the 22 counts features in the case involving 19 counts.
Other accused persons in the case are a former Director of the Nigerian National Petroleum Corporation, Aminu Baba-Kusa and his two companies, Acacia Holdings Limited and Reliance Referral Hospital Limited.

At Wednesday’s hearing before Justice Affen, Dasuki’s lawyer, Mr. Ahmed Raji (SAN), urged the court to grant bail to his client on liberal terms as he is presumed innocent.

The various defence lawyers separately representing Bafarawa, his son, Yuguda and Salisu also maintained that the allegations by the prosecution that the accused persons would escape and frustrate their trial if granted bail were speculative.

They also denied an allegation by the prosecution that their clients would interfere with further investigation into the arms procurement scam.

They also said their clients were eager to defend themselves and prove their innocence and so would never interfere with prosecution witnesses as alleged by the EFCC in its opposition to the bail applications.

EFCC counsel, Mr. Rotimi Jacobs (SAN), in opposing the applications accused the defendant of compromising the security of the nation. He noted that their action was tantamount to economic sabotage through their alleged diversion of funds meant for the procurement of arms to fight terrorism.

Jacobs said going by the weight of evidence against the accused persons and the likelihood of their conviction, there was high probability that they would jump bail.

He urged the court not to grant bail to Dasuki, whom he said “will escape from the jurisdiction of the honourable court from Nigeria,” adding that “the applicant will not be available to stand trial if released on bail.”

He also said both Dasuki as a former NSA and retired colonel and Salisu as a former Director of Finance and Administration in the NSA office, had the capacity to intimidate the prosecution witnesses who were civil servants that had worked under them.

The accused persons were arraigned on 22 counts of misappropriation of about N13bn between August 2013 and May 7, 2015.