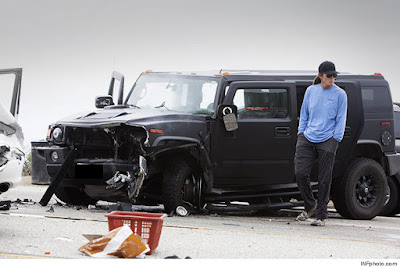 Five people who were in the Hummer that was part of the fatal crash triggered by Caitlyn Jenner have filed a lawsuit, claiming they were injured both physically and emotionally. In the lawsuit, obtained by TMZ, 5 members of the Wolf-Millesi family claim they were all cruising along in their 2006 black H2 Hummer when they felt the thunderous impact of the Lexus that Jenner had just struck. The Lexus driver died instantly.


The lawsuit claims Jenner acted recklessly, driving at an unsafe speed for road conditions. As we reported, the L.A. County Sheriff's Dept. concluded Jenner was not paying attention and failed to brake in time, which caused her to strike the Lexus, which ricocheted into the Hummer.


According to the suit, one person in the car suffered a severe cervical fracture that left her permanently disabled. Another claims severe nerve damage. A third claims blunt force trauma; but the most serious is there was a one-month-old newborn in the Hummer who was "not responding at the scene." The baby was taken to UCLA Medical Center and survived.
The suit, filed by Spencer Lucas from Panish Shea & Boyle, says, "The emotional effects of being involved in a collision that has taken the life of another has caused tremendous distress and suffering."

The suit does not specify a damage amount.