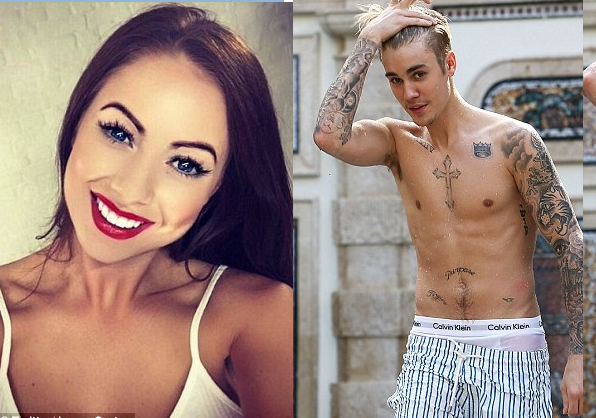 Laura Carter was partying with friends in London's Tape club when Bieber's security men invited her to join 20 women at his table.At around 2.30am the 21-year-old singer, who was unwinding asked her to come to his hotel for a private party - which ended with a visit from police.

Miss Carter, 30, told The Sun on Sunday's Nicola Fahey she wanted to take a selfie but couldn't because she'd been made to leave her mobile phone in a bucket at the door.

“Any other time I’d have been like, ‘Hang on a minute’ — but it was Justin Bieber. I’d fancied him forever.”I was taken to this huge room which had been kitted out with a massive sounds system and there was booze everywhere.
'There were four boys and a group of ten girls, all really glamorous.'The party was in full swing and Justin was showing off his dance moves.“I wanted to take a selfie to show all my friends but security took my phone at the door and put it in a bucket.

She  said Bieber began showing off his dance moves and then suggested a game of truth or dare at the historic Rosewood Hotel.


“He said, ‘Right, girls, let’s play.’ He kissed one of the girls as a dare and that’s when it started to get on another level.”

He took a girl into a bedroom before swaggering back in his boxer shorts 20 minutes later. A friend took Laura’s hand and then Bieber led her to the bedroom too.The second girl was in her underwear, lying on a king-sized bed covered with satin sheets.


“It was amazing and surreal. The lights were off and we started kissing against a wall.
“When I looked over to the bed there was another girl. I think she was American.
“They had clearly been doing something.
“We got on to the bed and all started fooling around together.”

But the girl flounced out when Justin lavished Laura with more attention. She said:


“She didn’t like the fact I was in the situation and left in a strop about ten minutes in.Justin didn’t go after her. In fact, he seemed more into it, happier, when it was just me and him.“We just had the most amazing sex. We’d stop for a while and have a cigarette together and a chat“He asked a lot about me and what I did“I told him I couldn’t believe I was there with him and he just laughed and said I was cool.“It was a bit cheesy-American but he did not disappoint.“Those naked pictures did not do him justice.”

She and Bieber continued before saying their goodbyes at around 6.30am. Shortly before, police were called to the hotel in High Holborn when one of the women at Bieber's party had a 'meltdown'.
Posted by dubem naija blog at 1:30 pm