Bbm Introduces Another Awesome Feature, Check It Out 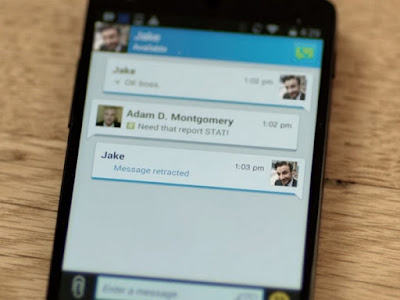 The latest update for BBM for Android is probably the most extensive in a very long time. The ability to withdraw sent messages and pictures is among the highlights, but there are plenty of other treats in the mix. BBM for Android got a major update that allows users to have the same features found on iOS and BlackBerry 10, including the ability to retract sent messages.

The update is one of the most important for the platform in a long time, so BBM fans on Android should be excited, if even a little bit.

The question is what are the new features the new BBM app has brought to Android users? Well, for starters, users of the app now have the ability to search BBM chats, contacts, and groups. This is a feature most have been asking for, and now it's here.

The new update also makes it possible to like posts in the BBM feed. Users can now delete unwanted conversations in chat, you know, that conversation about Tom being an alien, but no one can ever find out.

Want to know the location of folks in your contact list? It's now possible to request that information by using a new feature called Glympse. Some contacts will even be able to receive messages broadcasted to them.
One interesting feature that should have everyone talking is the ability to retract a message. This is important because sometimes folks send messages they later realized should not have been sent, and as such should be able to take it back. This is similar to the feature in Gmail where after an email was sent, users had a short window to stop it on its tracks.

With this new BBM update, messages aren't the only things that can be retracted. The option is there to withdraw images, and we know how folks tend to share images they shouldn't be sharing over social media apps such as these.

We like that the update doesn't just allow users to retract a single message. If a user feels the need to, he or she can withdraw all messages in a single chat or group - kind of cool, right?

As expected, the update brings with it the regular bug fixes to make for a smoother overall experience. For those who have yet to see an update prompt for BBM on Android, we suggest heading over to the Google Play Store to get it.
Posted by dubem naija blog at 12:35 pm