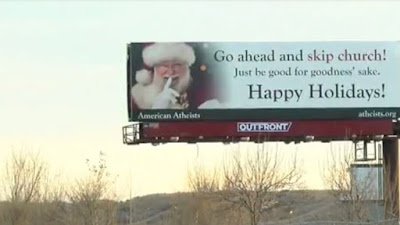 An atheist group ruffled some feathers after it bought at least two billboards urging people to skip church on Christmas. The billboards feature a smiling Santa Claus with the text: "Just be good for goodness sake. Happy Holidays!” The signs appear in Colorado Springs, Colorado, and Raleigh, North Carolina.
American Atheists program director Nick Fish said his group aimed to combat stereotypes.
“We want it to be either a little funny, or edgy, or provocative in some way, so when people see it, they stop and go, ‘Hey, wait a second, what did that just say?'” he told WCNC.

Not everybody was on board. “It can be insulting to those who are religious and do celebrate it for Christianity and religion in general,” Alexis Esselman told Fox 21.

The group reports that it targets areas where evangelical Christianity has a significant presence
Posted by dubem naija blog at 4:39 pm