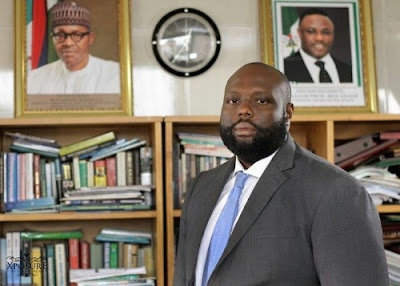 Born on September 25th 1985, he is the current Cross River State’s Finance Commissioner. He attended King’s College, Lagos, before proceeding to study Economics at the University of Reading, UK. He also bagged his Msc. Distinction in International Banking and Financial Services from the same university.
He attended the Key Executive Program at the Harvard Business School. He has also attended the Global Executive Leadership Program at Howard University Business School; the Executive Management Development Program at the University of Pretoria; the Euromoney Oil & Gas School London, etc.

He is also a member of the Chartered Institute of Bankers of Nigeria. After a brief working stint in England, he returned to Nigeria to work as a Financial Analyst in Lagos and then relocated to Cross River to become a lecturer in the Banking and Finance Department of the University of Calabar.

He established Iquasu Ventures Ltd in 2010; he later took over as the MD of Chamley Bureau de Change Ltd. He was later appointed as the Executive Director for finance at Pearland Energy and Non-Executive Director at Ekondo Microfinance Bank Ltd
Posted by dubem naija blog at 3:42 pm